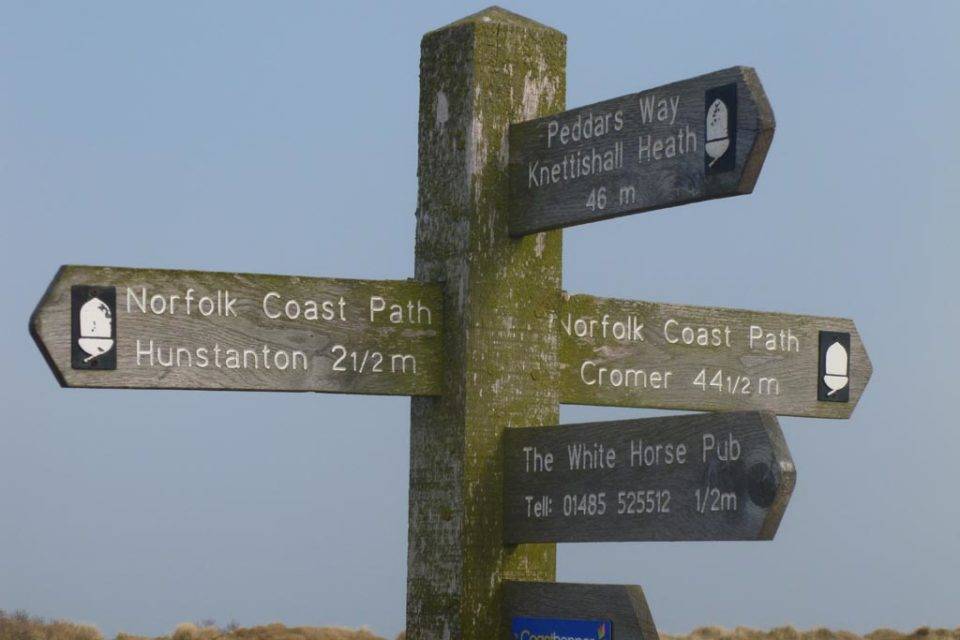 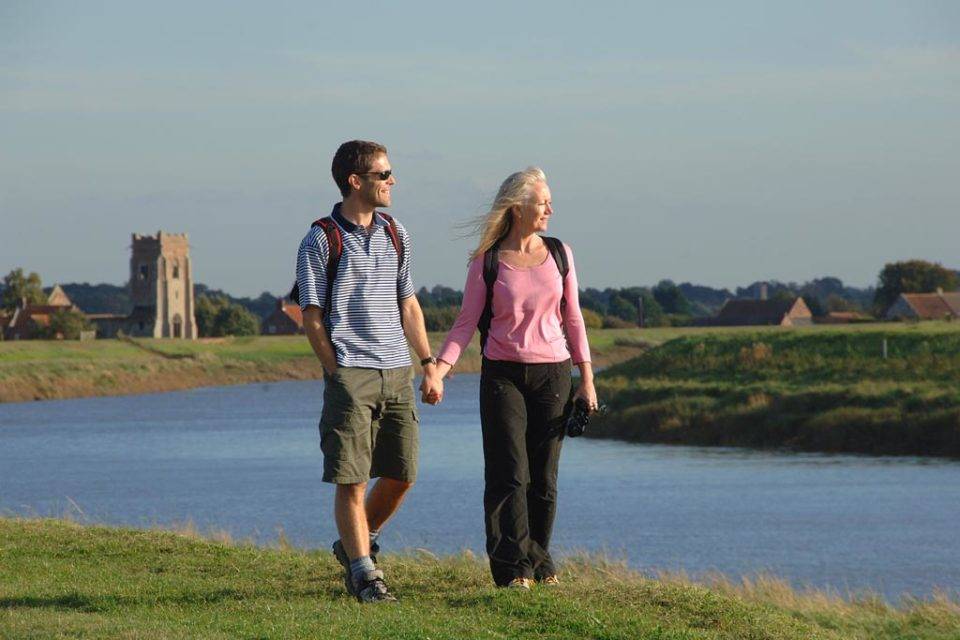 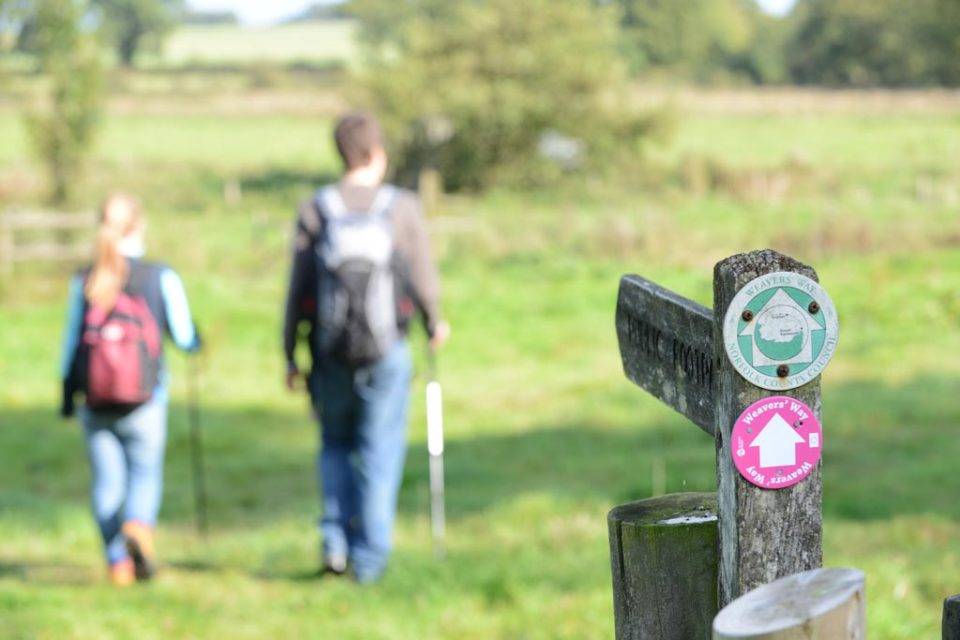 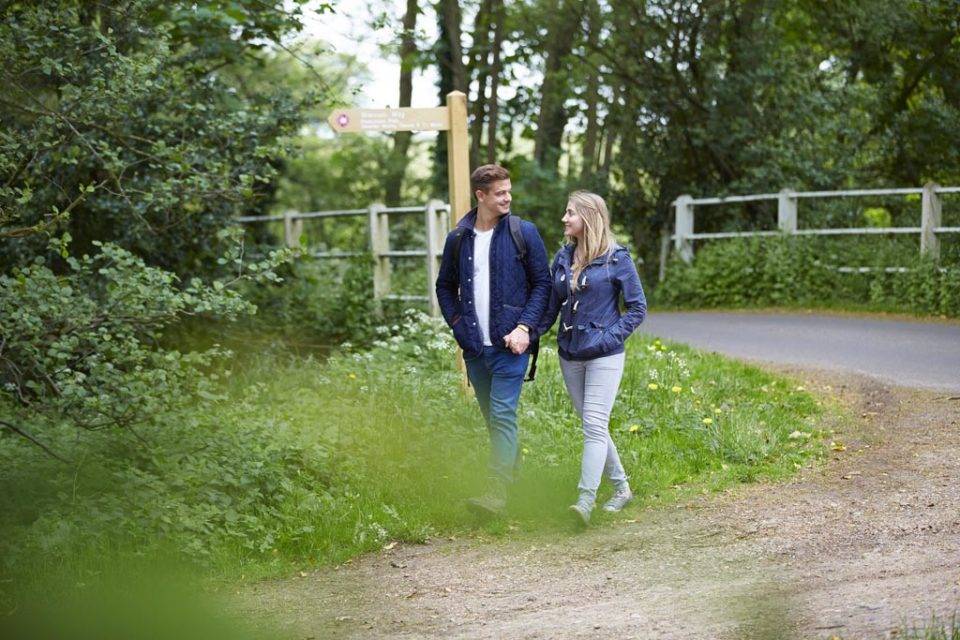 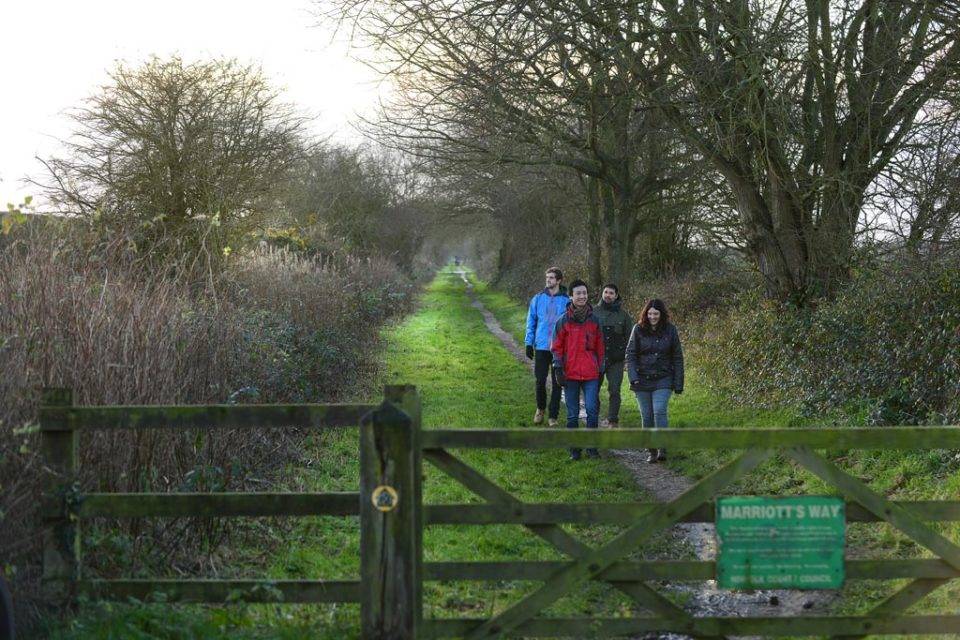 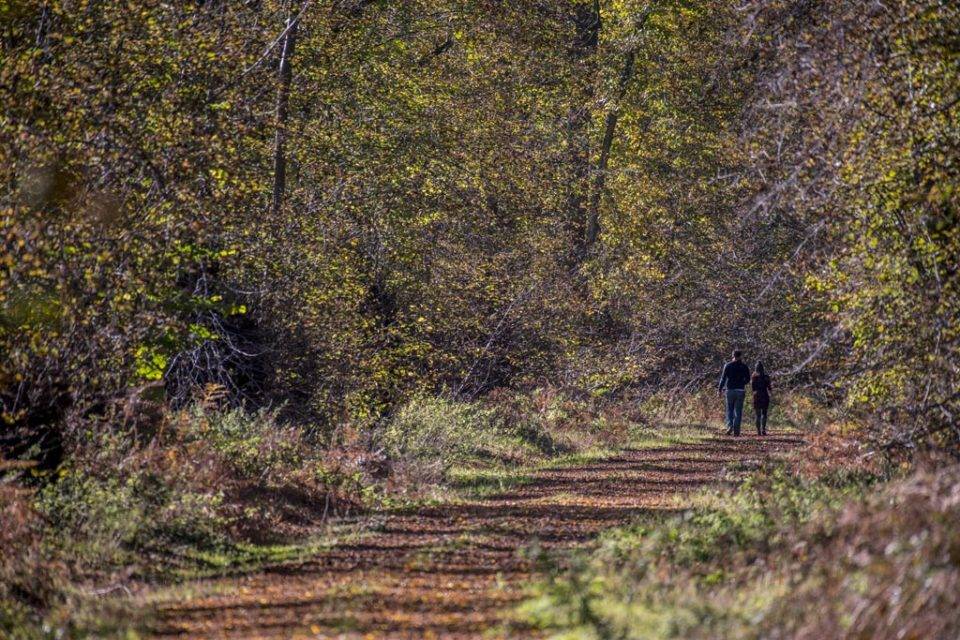 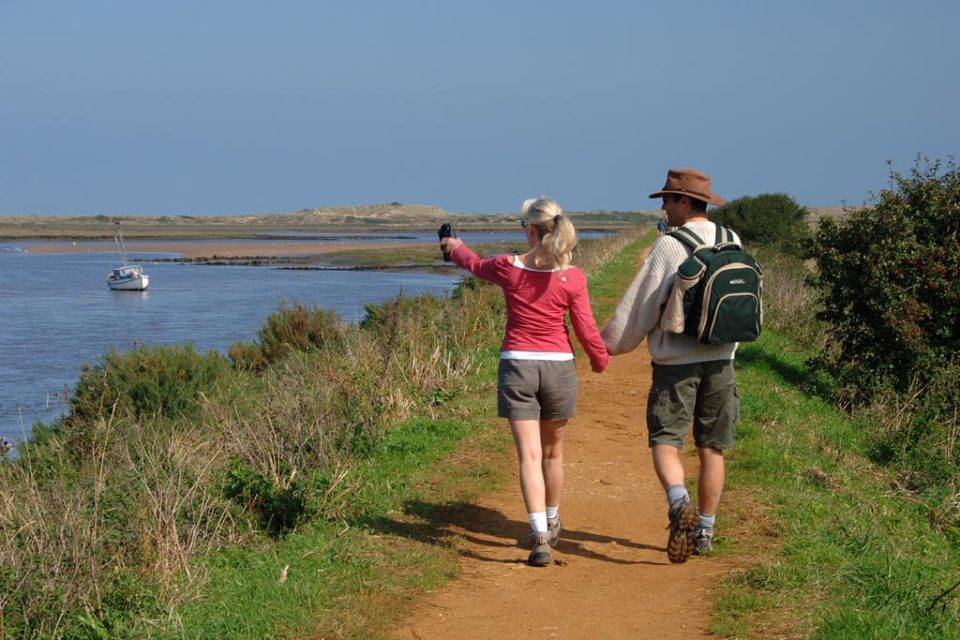 The Norfolk Trails network brings together over 1200 miles of walks, cycle and bridle routes throughout our beautiful county.

Norfolk can boast coast, country, fen and forest walking, and all set within an easy, rolling landscape.

Enjoy walking holidays in Norfolk tramping through golden leaves and russet woodlands in the autumn, or take a brisk walk past crisp hedgerows in the crackling frosty winter. And spring and summer are spectacular with colourful wild flowers such as our famous Norfolk poppies and sun-washed sandy beaches.

The county’s footpaths are well-maintained and clearly-signed and there are lots of places to begin walking with plenty of pubs, tearooms, guest houses and campsites en route where you can stop for a well-deserved break.

Throughout Norfolk there are many trails and routes which will challenge, delight and inspire you. Choose a route which suits your energy level and experience and takes you through the type of countryside you enjoy the most.

The county’s main routes are listed below, but please also visit Norfolk Trails for more information and downloadable maps. There is also an interactive map to help you find the right walk for you. 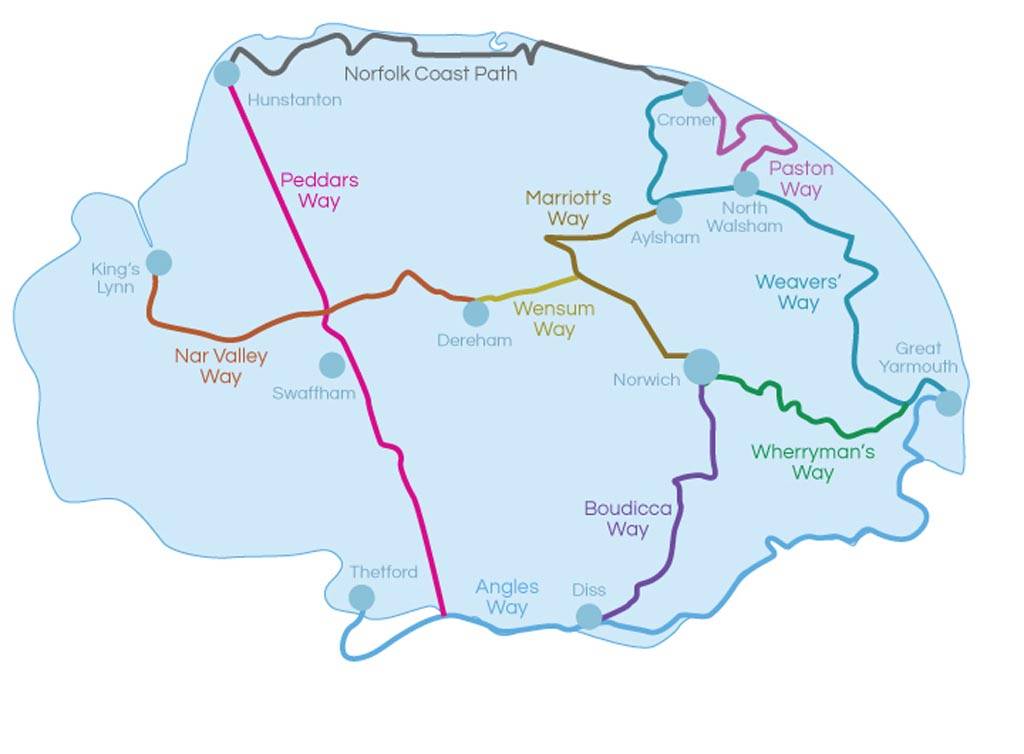 Angles Way is a 93 mile walking trail following the county boundary of Norfolk and Suffolk, gently meandering from Great Yarmouth through to Thetford.

After Breydon Water (near Great Yarmouth) Angles Way follows the Waveney Valley to the source of the River Waveney, passing through open countryside, broad river valleys, pretty villages and the ancient market towns of Beccles, Bungay, Harleston and Diss.

The route then meets up with the Little Ouse at Knettishall Heath with a striking change in scenery as it winds through the heathland and woodland of the Suffolk Brecks before finishing in Thetford.

Named after the legendary warrior and Queen of the Iceni whose tribes once inhabited the area, the Boudicca Way runs for approximately 36 miles between Norwich and Diss, roughly parallel with the old Roman ‘Pye’ Road.

Boudicca Way passes through the rural, gently undulating countryside of south Norfolk and the Waveney Valley using public rights of way and quiet country roads, where visitors can find unusual wildlife and flora.

Along the way, the trail passes picturesque villages such as Shotesham, Saxlingham Nethergate and Pulham Market. The area also has strong historical heritage, including Venta Icenorum, the Roman Town at Caistor St Edmund, which was the Roman administrative centre for the area.

The Fen Rivers Way runs for nearly 50 miles between the historic settlements of King’s Lynn and Cambridge, tracing the course of rivers that drain slowly across the Fens into the Wash.

The distinctive fenland landscape has been heavily influenced by man. Its fertile agricultural land is dissected by dykes, rivers and embankments, constructed over centuries in the struggle to reclaim the land.  The area is dominated by dramatic open landscapes and vast skies, giving the Fens their unique character.

Marriott’s Way is a 26 mile footpath, bridleway and cycle route which follows the routes of two disused railway lines, running between the historic market town of Aylsham and the medieval city of Norwich.

Countryside, wildlife, public art and a wealth of local history can be found along the way, whilst Marriott’s Way itself is a county wildlife site and passes through many interesting landscapes and wildlife-rich habitats, such as the Wensum river valley and Whitwell Common.

Along Marriott’s Way you may see a variety of birds, animals and plants including kestrels, owls, hares, deer, butterflies, primroses, orchids and even otters and kingfishers.

Nar Valley Way is a 33 mile long walking trail meandering through contrasting landscapes between the medieval town of King’s Lynn and the Farm and Workhouse museum in Gressenhall.

The route follows quiet tracks and lanes, crossing farmland and passing through woods, meadows and commons. The River Nar is never far away, with long stretches of riverside path to enjoy.

Open farmland around Mileham contrasts with the expansive lowland panoramas near King’s Lynn, and the intimate woodland glades found at West Acre and Narborough.

Intriguing local heritage and historic remains are encountered regularly along the way, including Pentney Abbey, West Acre Priory, Castle Acre castle remains and Priory. Look out too for the fine variety of historic churches including the Anglo-Saxon round tower at East Lexham.

The Norfolk Coast Path runs for 42 miles from Hunstanton to Cromer, with the majority of this walking trail running through the dramatic landscape of the Norfolk Coast Area of Outstanding Natural Beauty.

The most westerly point of the Norfolk Coast Path is the seaside town of Hunstanton. It then passes through areas rich in wildlife – first the salt marshes near Brancaster, then Holkham National Nature Reserve with its extensive sandy beaches and pine woodland underlining the vast open sky. Look out for massive flocks of geese in the winter, coming in to safely spend the night here.

After Wells-next-the-Sea the Norfolk Coast Path skirts along the edge of salt marshes, with views of Blakeney Point, famous for its grey and common seals.
Cley-next-the-Sea marks the start of the section that follows an extensive shingle beach and wildlife-rich freshwater marshes. The route continues along the shingle beach almost as far as Sheringham, where it follows the top of the sandy cliffs, heading inland and meandering through the wooded hills between Sheringham and Cromer.

Paston Way is a 22 mile walk between Cromer and North Walsham, discovering the area’s beautiful medieval churches. Each church has its own hidden history and one was even moved brick by brick from a cliff top to save it from the sea.

To visit all 14 of the fine churches on the Paston Way, the trail covers 29.5 miles.
In travelling church to church, the trail ambles down quiet lanes, through picturesque towns and villages, across vast arable fields, disused railway lines and quiet grazing pastures with views of the North Sea. Keep a look out for seals on the stretches of beach walk too.

The Paston Way takes its name from the Paston family who during the Medieval and Tudor periods were the dominant and wealthy landowners in the area through which much of the trail passes. The Paston family in turn had taken their name from the small village of Paston on the north east Norfolk coast. They also wrote the famous Paston Letters.

Peddars Way follows a Roman road built along the line of an even older trackway. The name, Peddars Way, is said to be derived from the Latin ‘pedester’, which means ‘on foot’.

The trail starts in the Brecks, a unique area of forest, heath and low river valleys, running north from Knettishall Heath in Suffolk, for 46 miles through changing countryside to the north Norfolk coast near Hunstanton.

Much of the Peddars Way can be used by cyclists and there is a special route available to horseriders.

Named after the once important weaving industry, which flourished in the Middle Ages around North Walsham, Weavers’ Way runs for 61 miles between Cromer and Great Yarmouth.

Weavers’ Way offers a rich contrast of scenery, from the woodlands and mixed farmland of north Norfolk to the grazing marshes beside the rivers Thurne, Bure and Yare.

Some parts of the trail are available for cyclists and horse riders.

The 12 mile Wensum Way passes through some beautiful central Norfolk landscape, much of it alongside or close to the river that gives the trail its name.

The River Wensum, which takes its name from Old English word for ‘winding’, is a designated SSSI (Site of Special Scientific Interest) and a Special Area of Conservation.

The Wensum Way links the Nar Valley Way at Gressenhall with the Marriott’s Way at Lenwade, passing through rural landscape between Gressenhall and Swanton Morley, then following the river valley, abundant with wildlife, through to Lenwade. Along the way, take in outstanding views, picturesque villages and historic sites.

Taking its name from the wherry, a large cargo-carrying barge whose black sails were a once common sight on these waters, Wherryman’s Way runs through the heart of the Broads, winding along the banks of the River Yare, through open marshes, reedbeds, grazing meadows and riverside villages. 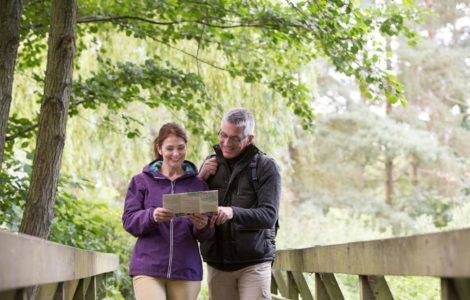