Norfolk’s history of wealthy landowners means a legacy of magnificent stately homes that are open to the public. Our very own Downton Abbeys include Sandringham, the Royal family’s country retreat, Holkham Hall, Houghton Hall, the home of Britain’s first Prime Minister, and the National Trust owned Blickling Hall, Felbrigg Hall and Oxburgh Hall. 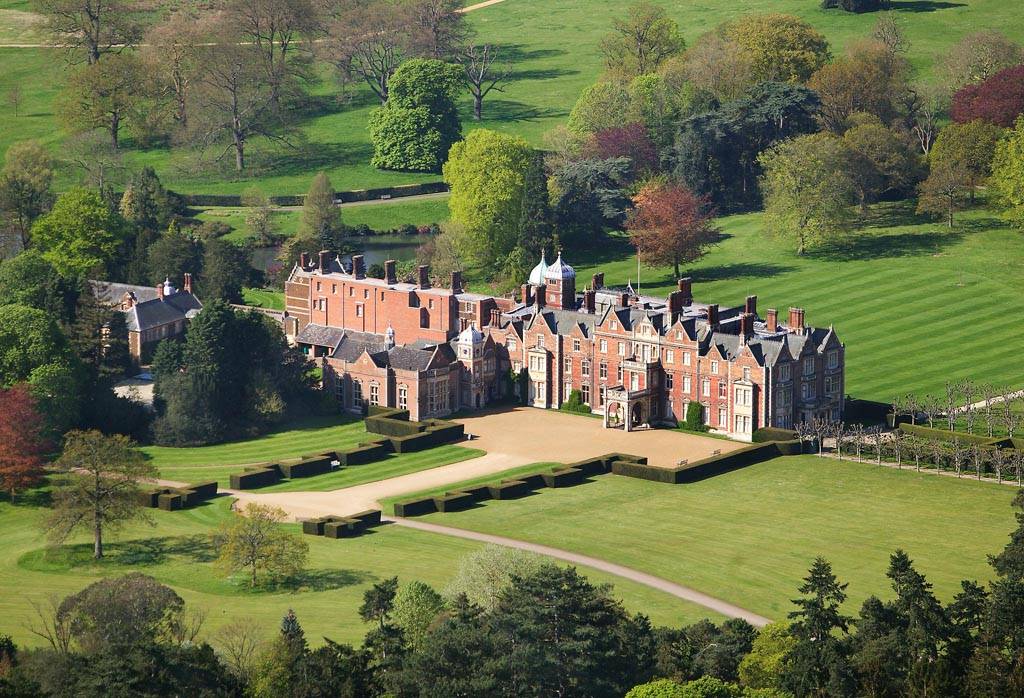 The Royal Family’s private country house, all the main ground floor rooms used by them are open to the public. The Ballroom displays a different exhibition each year, and there are more family possessions displayed in the museum including vehicles ranging from a 1900 Daimler to a half-scale Aston Martin used by Princes William and Harry.

There are sixty acres of informal gardens, six hundred acres of country park and the Sandringham Church which the Royals attend at Christmas is worth a visit. 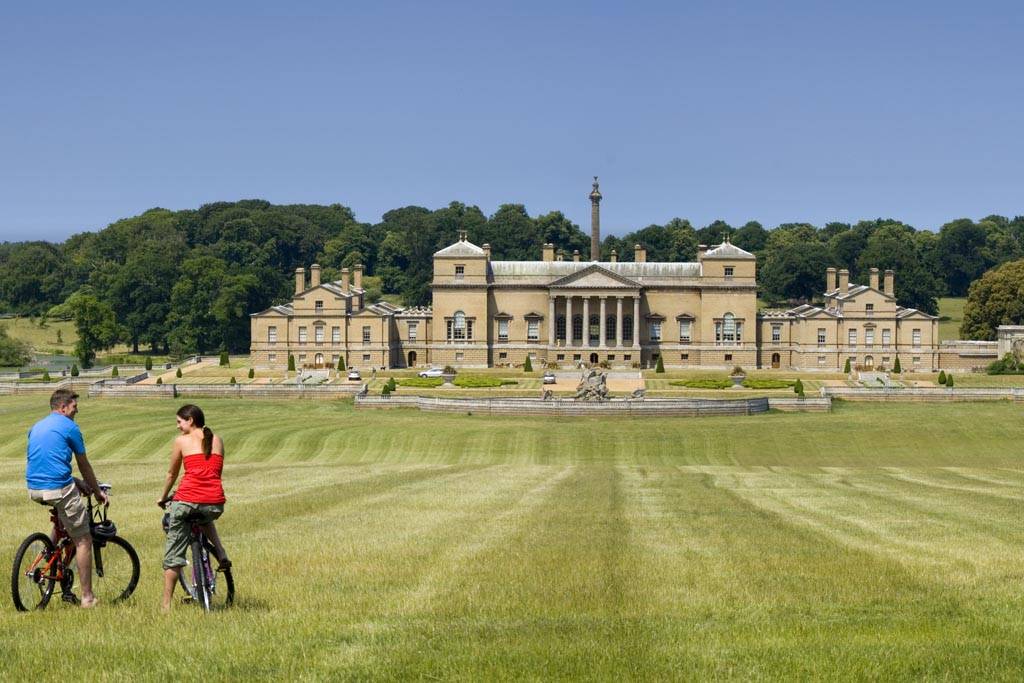 Steeped in history, Holkham Hall, a spectacular example of English Palladian style in local yellow brick, has the perfect location, surrounded by acres of rolling parkland rich in wildlife and the nearby north Norfolk coast with its stunning beach. Take in a spot of culture with a visit to the magnificent Palladian mansion and step back in time in the Bygones Museum.

Discover more with cycle and boat hire, or explore the 18th Century walled gardens, the Grand Tour statuary and art collection, restored Victorian kitchen and the immense entrance hall, with deeply coved and coffered ceiling supported by towering columns and panelling of English alabaster, is perhaps one of the finest classical rooms in England, modelled directly on ancient Roman buildings. Children will love the woodland adventure play area. 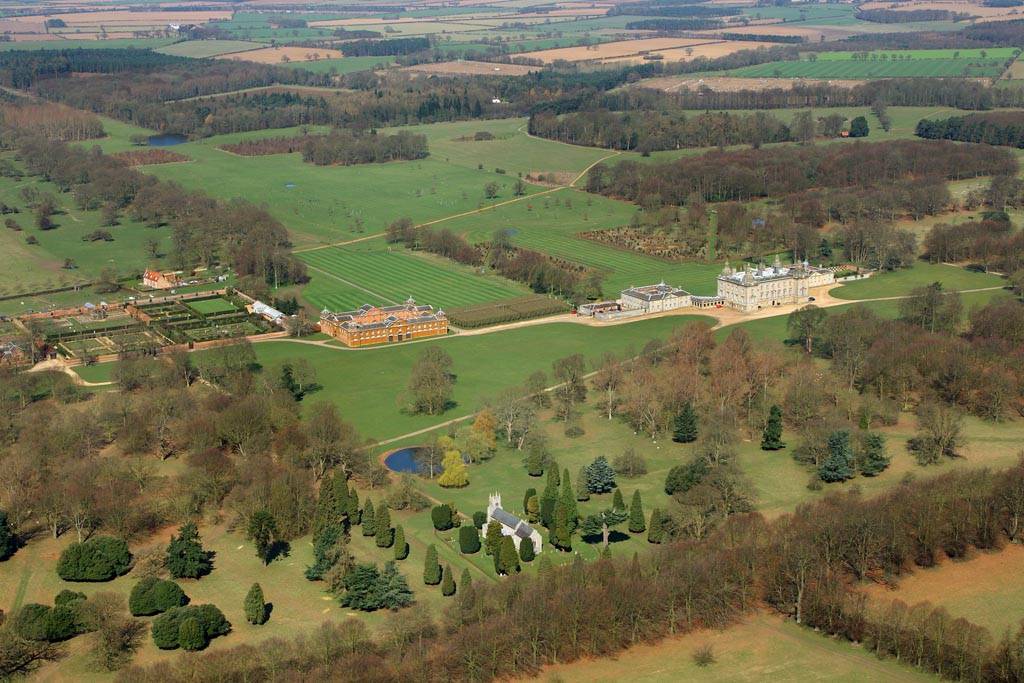 With its domed corner towers, this is one of the finest Palladian-style houses in England, built and furnished between 1722 and 1735 for Robert Walpole, Britain’s first Prime Minister. Its sumptuous Stone Hall, Marble Parlour, Cabinet Room and Salon are just some of the parade of state rooms, all lavishly endowed with pictures, statuary and fine furniture. There is also the Marquess of Cholmondeley’s collection of 20,000 model soldiers and militaria. The Hall is surrounded by parkland, home to a herd of white fallow and exotic deer, and there is a restored walled garden. 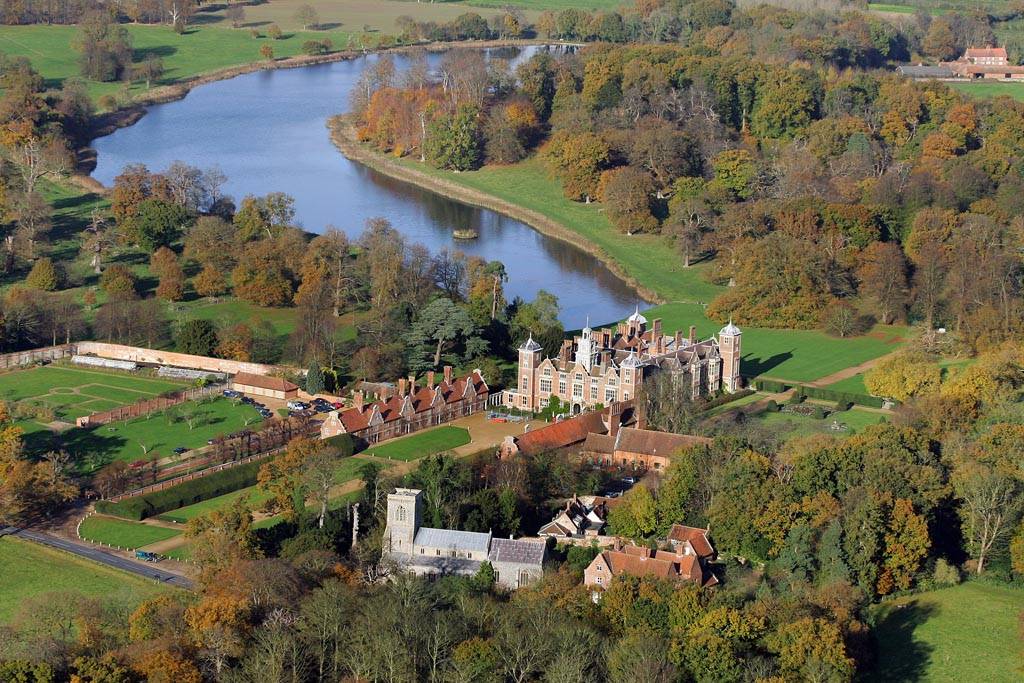 Nobody ever forgets their first sight of Blickling, run by the National Trust. The breath-taking red-brick mansion and ancient yew hedges sit at the heart of a magnificent garden and historic park in the beautiful Bure meadows. The landscape with its hedges and narrow tree-lined lanes has changed little over the centuries and is quintessentially Norfolk. Explore the house, with its nationally important book collection, and hear the real voices of the servants who once worked ‘downstairs’. Hire a bike or grab a map of way-marked walks and head out into the park. Keep your eyes open for lost buildings, stunning views and wildlife who call it home. 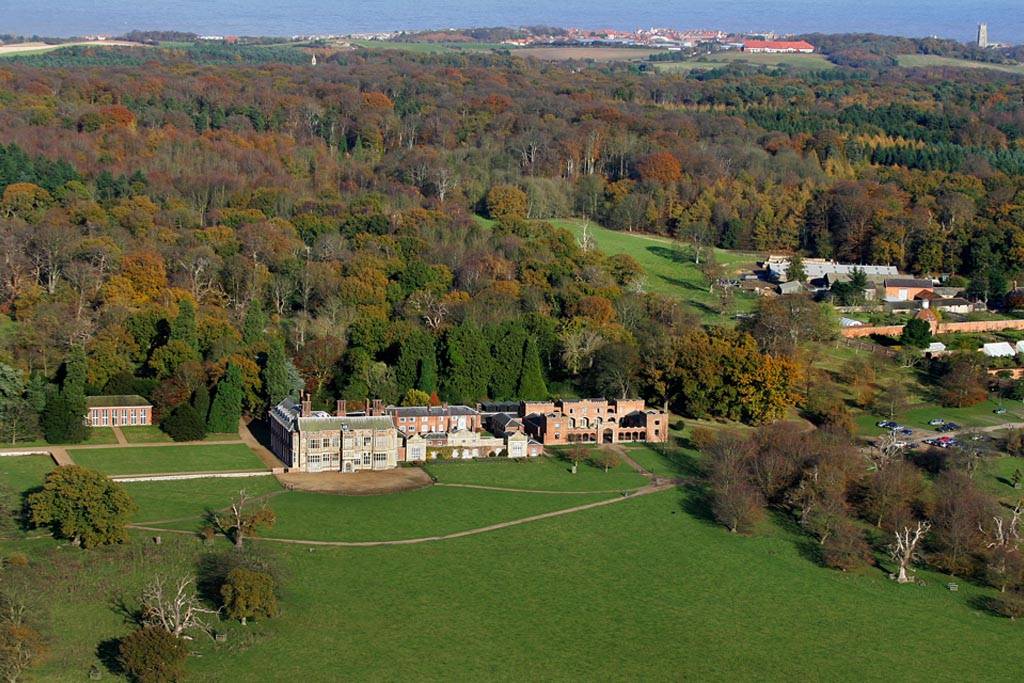 One of the most elegant country houses in East Anglia, the Hall is a place of surprises and delights, a mixture of opulence and homeliness where each room has something to feed the imagination. From the stained glass windows in the great hall to the nodding mandarins in the chinese bedroom; from Queen Mary’s teapot in the dining room to the copper pans in the kitchen. Story boxes for the children help explain some of the history of the house.

Outside, the decorative and productive walled garden is a gardener’s delight and inspiration, providing beautiful flowers for the hall, with the allotments in the walled garden providing fruit and vegetables for the community.

The rolling landscape park with a lake, 520 acres of woods and waymarked trails is a great place to explore nature and wildlife on this bountiful estate. 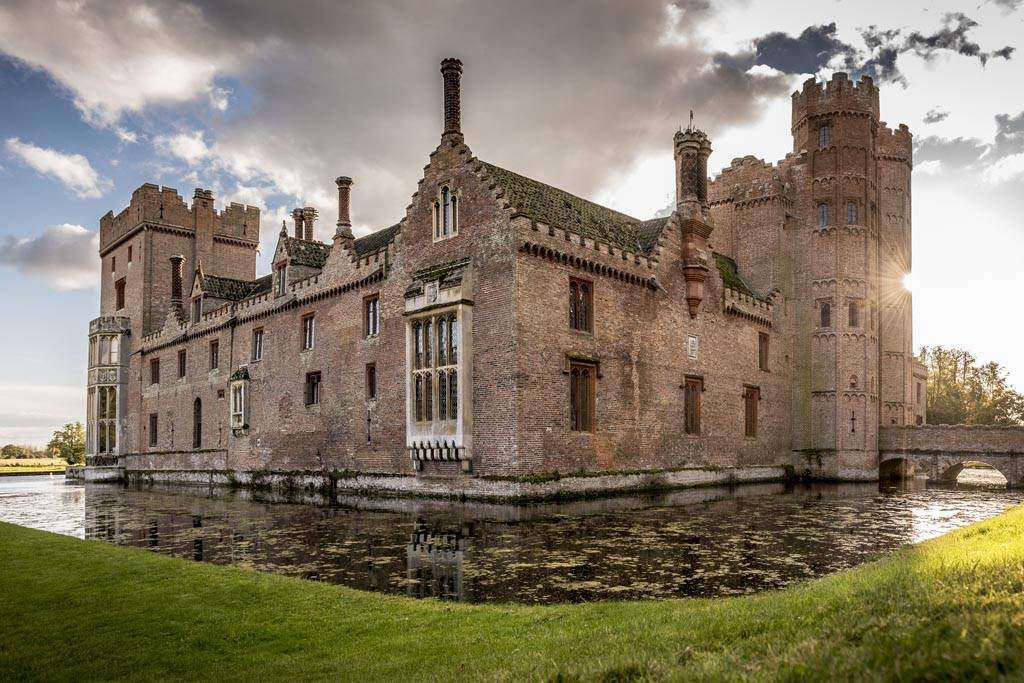 Step back in time through the magnificent gatehouse into the dangerous world of Tudor politics. Home to the Bedingfield family since 1482 this stunning moated red-brick house charts their precarious history from medieval austerity to neo-Gothic Victorian comfort. As well as early Mortlake tapestries in the Queen’s Room, Oxburgh houses beautiful embroidery by both Mary Queen of Scots and the famous Bess of Harwick.

Panoramic views from the roof look out over the Victorian French parterre, walled orchard, kitchen garden and a Catholic chapel. Run by the National Trust. 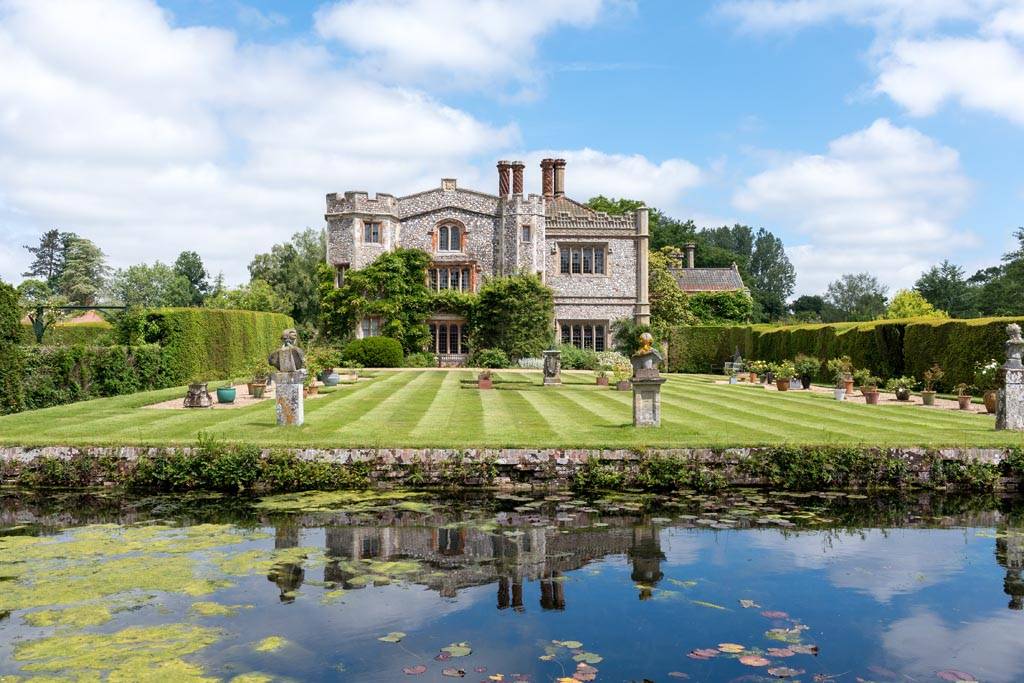 Roses feature throughout, especially in the walled Heritage Rose Garden and Modern Rose Garden reflecting changing tastes in gardens and roses. Also lake, shrubs, trees, follies, scented garden, wildflowers and extensive walks. Lovely country walks with marked trails open every day of the year. The hall itself is only open by appointment or for special events. 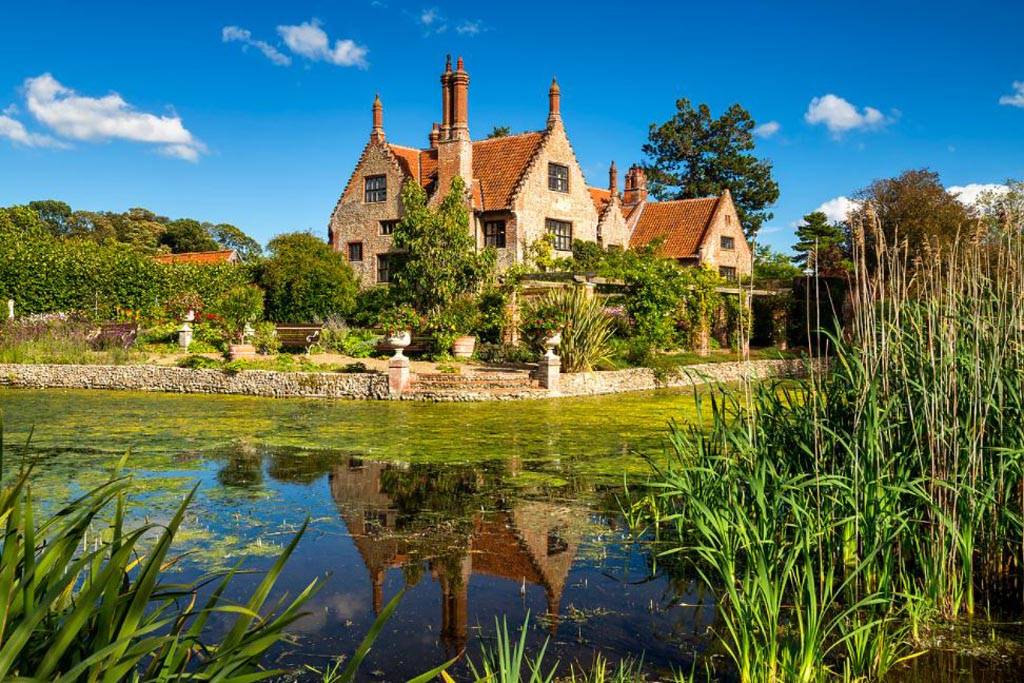 A flint house nestling at the bottom of a river valley, surrounded by a moat known to date from 1250. It originally enclosed a number of wooden medieval buildings and a community working for the Prior of Norwich to produce fish from the adjacent fish ponds. The south east wing dates from the 15th century (Henry VII) and the remainder is Elizabethan (16th century). It is virtually unchanged from when it was enlarged by Martin Hastings in 1562.