Norwich Notables – eleven people who made the City of Stories

Coming to Norwich for a break or during a visit to the county? Want to amaze your family or friends with some pukka anecdotes about Norwich notables? Read on… 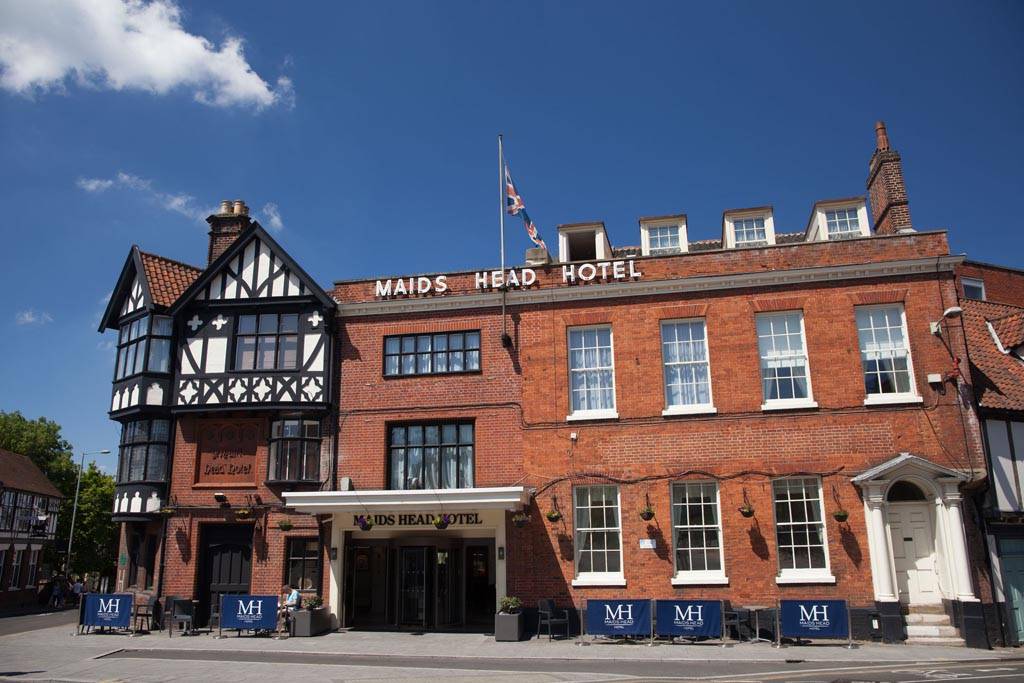 The Maid’s Head Hotel, where Queen Elizabeth I stayed while on a visit to Norwich.

In 1559 Queen Elizabeth I appointed Norwich’s Matthew Parker, a notable administrator, to be Archbishop of Canterbury and sort out problems in the new Church of England. He did it with such diligence, vigour and enquiry that the freshly-minted Anglican fold coined a new phrase: Nosey Parker!

Parker, whose greatest success was the publication of his Thirty Nine Articles which ended religious in-fighting, had first met Elizabeth when Anne Boleyn of Blickling (her ghost is still seen at the National Trust property north of Norwich) charged him, on the eve of her execution, to look after the infant Princess.

Nosey Parker’s coat of arms is painted on the wall of the north-west corner of the cathedral cloisters and he has a green plaque on St Saviour’s Church in Magdalen Street, in the parish where he was born in 1504. 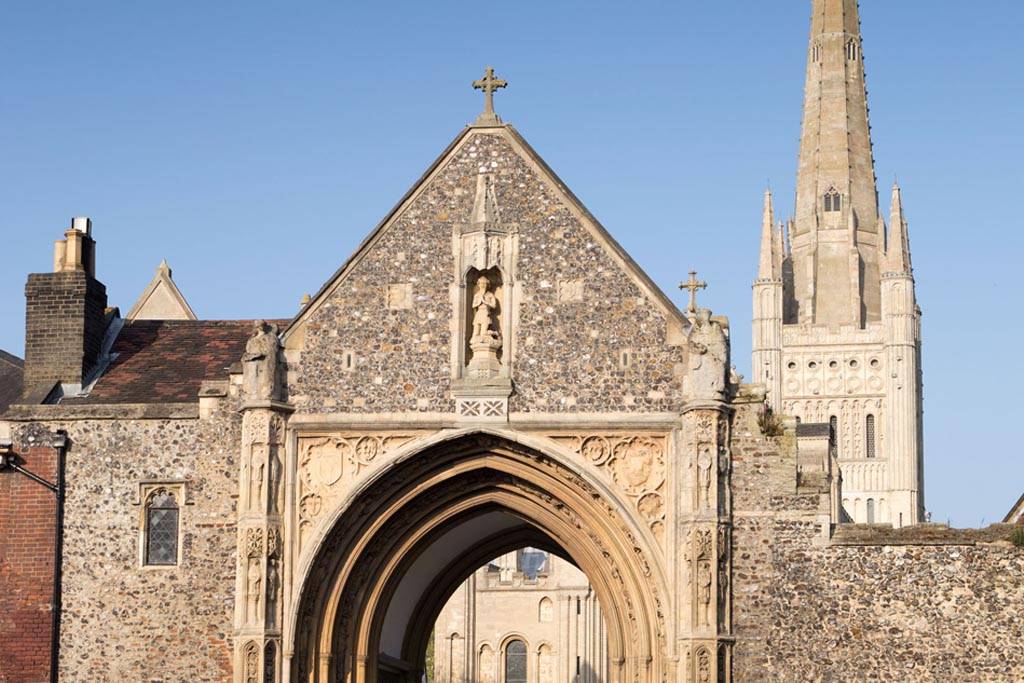 The Erpingham Gate at Norwich Cathedral.

At the great west end of Norwich cathedral you’ll see, if you look up, the statue of Sir Thomas Erpingham, who had it and the gate made around 1420. Erpingham was master of Henry V’s archers at the battle of Agincourt five years and his estate was just north of Norwich.

With only a flea-bitten, dysentery-ridden little English force against them (although… whisper it… most of the archers were Welsh… they had the short, stocky build required to pull huge force on the bowstrings), the 10,000 French noblemen and their soldiers thought the battle would be a foregone conclusion, so much so that they issued orders that any pesky archer caught alive should have the first two fingers of his right hand lopped off, so he would never draw a bowstring again.

The result is history. The French were annihilated by the archers’ prowess – 6000 dead to Henry’s 1600. In ridicule of the French orders, the archers flaunted their strong two digits at the beaten home team. The gesture endures today… although not in polite company.

A Brief History of Time in the City of Stories 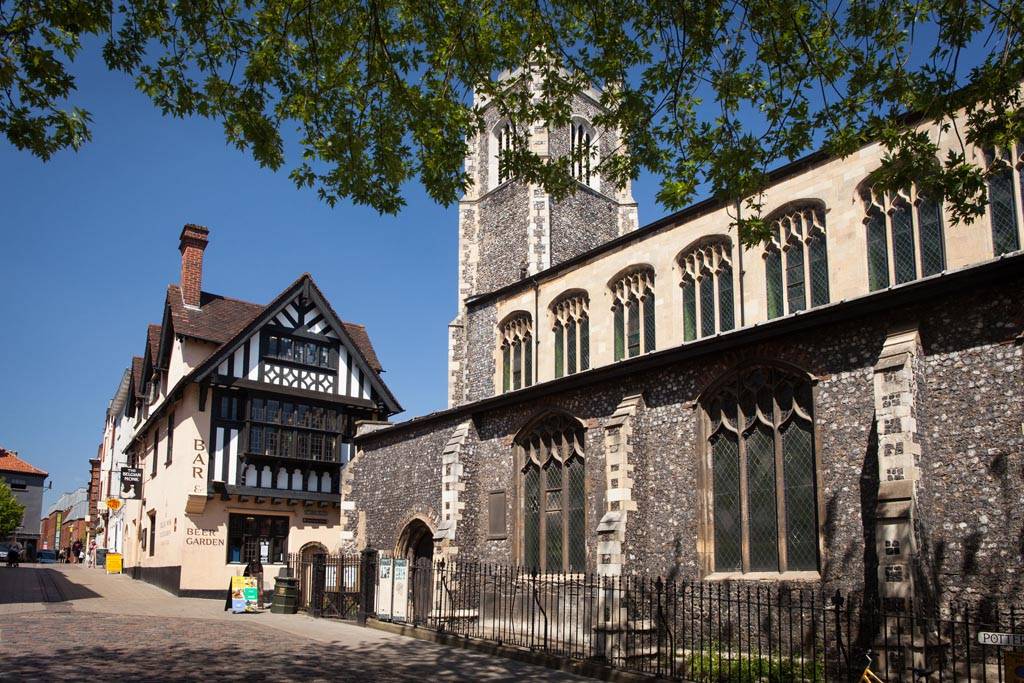 Pottergate in the Norwich Lanes.

Julie Andrews (or indeed Homer Simpson) wouldn’t have had such an illustrious singing career were it not for Norwich music teacher Sarah Ann Glover. Sarah, and her sisters Christina and Margaret, ran a school for young gentlewomen in a large building off Colegate, not far from Pottergate where she born and lived (there’s a blue plaque on the church wall at St Benedict’s Street). It was here that she developed the Tonic Sol-fa method of teaching singing. Would the hills have been so alive with music without Tonic Sol-fa’s Do, Re, Mi, Fa, So, La, Ti?
And Homer? Didn’t he sing, ‘Doh! A deer, a female deer. Doh! A drop of golden sun’? 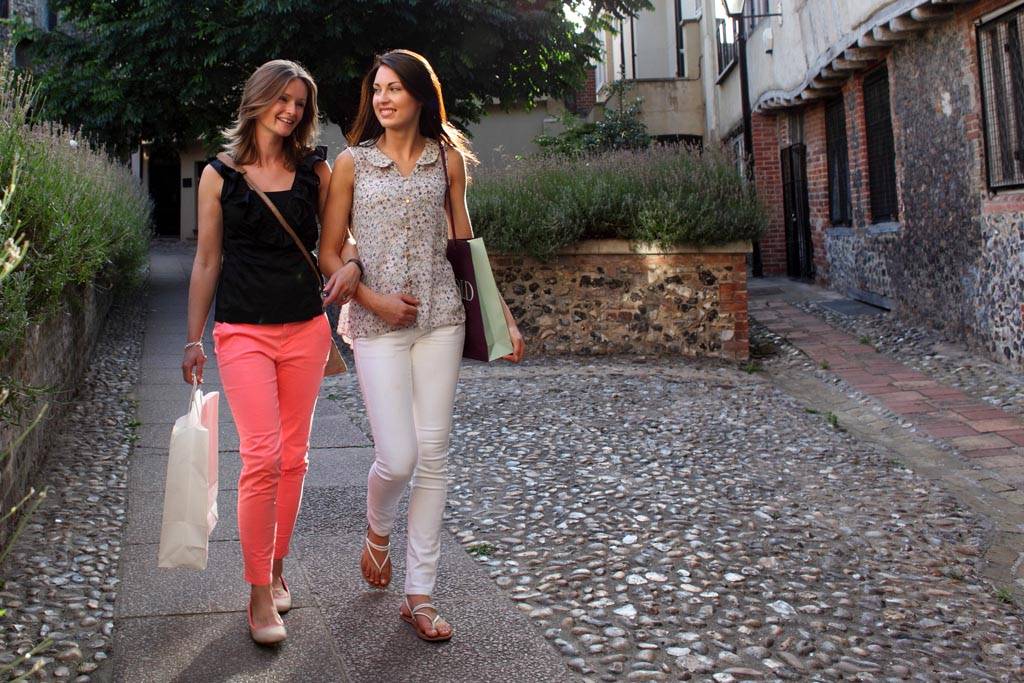 Three-times mayor of Norwich and MP Augustine Steward risked his life to restore order to the city during Kett’s Rebellion in 1549. When Kett’s 20,000-strong army descended on Norwich the incumbent mayor Thomas Codd was told to vacate or face consequences. He duly left, leaving his new deputy Steward to attempt negotiations.

Just behind Steward’s house, through the arch into Tombland Alley, was the tower of St George Church from where a muscled yobbo had the rebels truss up captives like chickens and take them to the top from where he launched them out over the parapet… amused to see the poor city defenders’ skulls explode like melons on striking the step at the base below (it’s still there).

Steward – and who could blame him – hid in his home’s top floor until the Earl of Warwick arrived with German mercenaries at which point he snuck out and opened St Benedict’s Gate, allowing them to recapture the city for Edward VI. Steward’s crooked house is still there – just across the road from the Erpingham Gate. 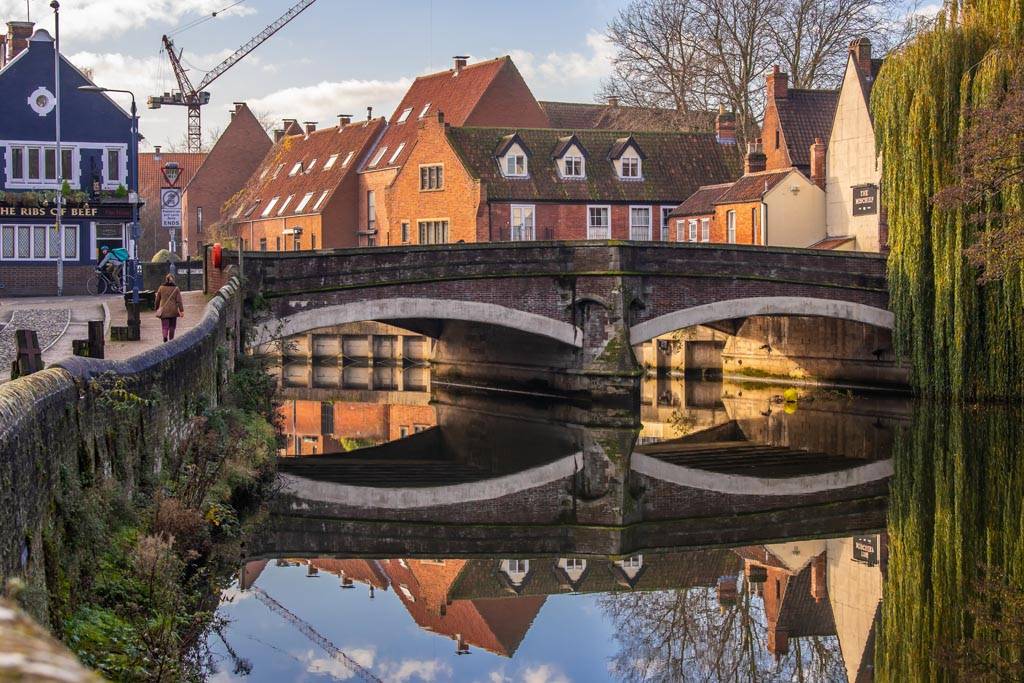 Fye Bridge, from which scolds were ducked.

Margaret Grove was the last woman to be dunked on the Cucking Stool at Fye Bridge in 1587. In medieval there were probably few forms of public entertainment so the procession of a scold or a harlot to the stool always drew a large crowd. In the 16th century, ducking was the common punishment of prostitutes, strumpets and common scolds.

The offending woman would be driven in a cart through the streets, holding a piece of paper on which her crime was written, with her tormentors following beating drums and blowing horns. She would then be tied to the stool and dunked in the cold, dirty water of the Wensum. Poor Margaret was sent under three times. A green plaque recognises the site of the stool. 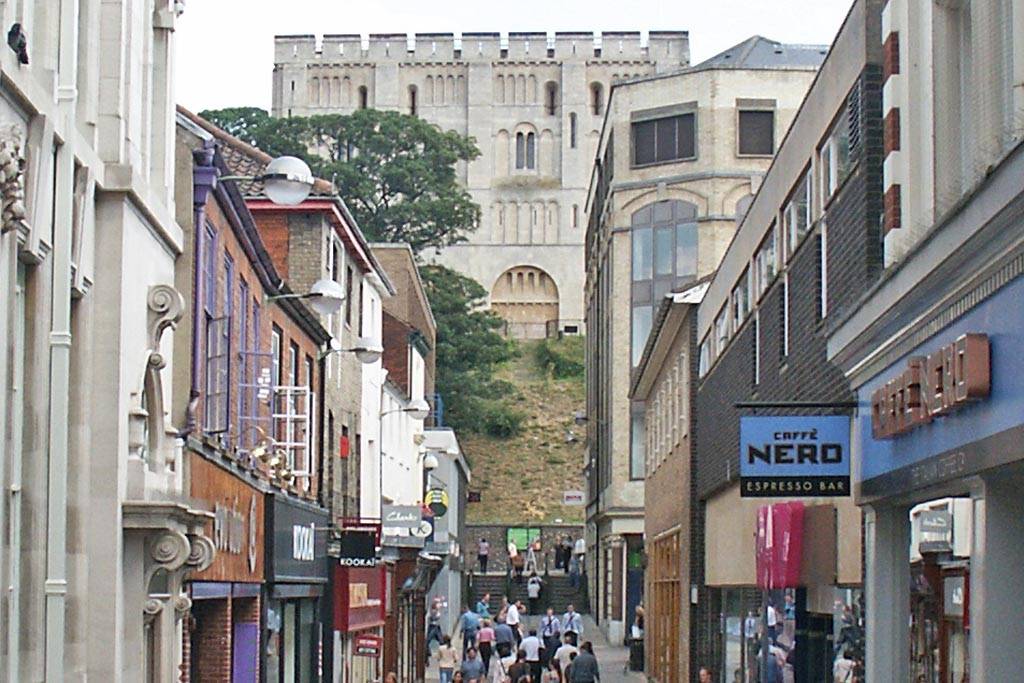 Davey Place with the Castle in the background.

Davey Place in the city centre has its origins in a threat to the King’s life in 1813, when city businessman Jonathan Davey told the Common Council that he intended to ‘put a hole in the King’s head’. The council shouted: ‘Treason!’

At the time Norwich was full of Jacobites and it had been only a few years since Revolutionary France had lopped off the king and queen’s bonces. Within a week, No 11 Market Place, then the principal coaching inn in the city, was up for auction and it was bought by Davey who demolished it and cut a passage from through the Walk to the Castle Ditches.

In creating the city’s first foot street, he was true to his word – he had indeed put a hole in The King’s Head! Geddit? 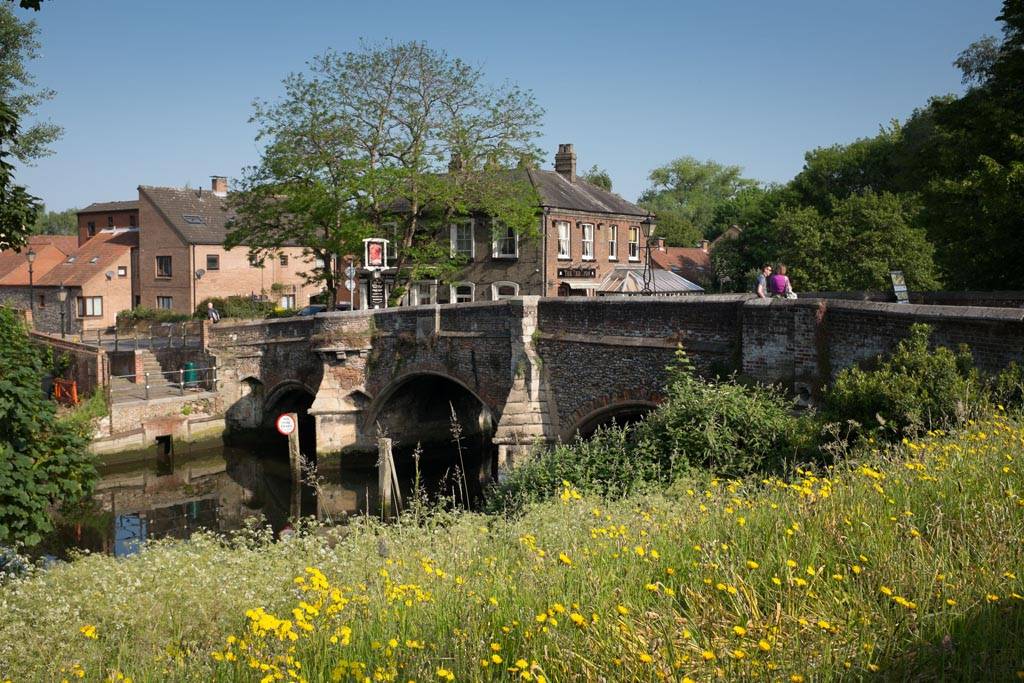 Bishopgate Bridge, close to the site of Lollard’s Pit.

John Wycliffe, the ‘Morning Star of the Reformation’, isn’t so much remembered in the city as his followers, the Lollards. Probably named after the Dutch word lollaerd, meaning mutterer or mumbler, from the Old High German lollon (meaning to sing softly, from which we take lullaby) the Lollards have their name on a Pit, marked by a green plaque on the Bridge House pub on Riverside close to Pull’s Ferry.

Long before Robert Kett launched his attacks on the city from here and the fledgling Canaries played their games at the nearby Nest, this area was the final resting place for those Wycliffe followers who refused to renounce their Protestant faith after Catholic Queen Mary took the throne. Victims were marched across Bishop’s Bridge in procession, chained to a post in the horse-shoe shaped hole, surrounded by faggots and straw, and then burned alive. In 1555 alone, 71 martyrs met their deaths there. Unsurprisingly, no connection to text speak: ‘lots of laughter’.

Yes… Adam and Eve. Okay, Norwich may not be able to claim fame to the first man and woman but the Adam and Eve can certainly claim to be the city’s first pub, a bread-and-ale magnet for the stonemasons who were building Norwich cathedral more than 900 years ago.

Let’s remember that at the time they only drank beer because it was significantly safer than the unsanitary water. Sadly, an excuse that wouldn’t work today. 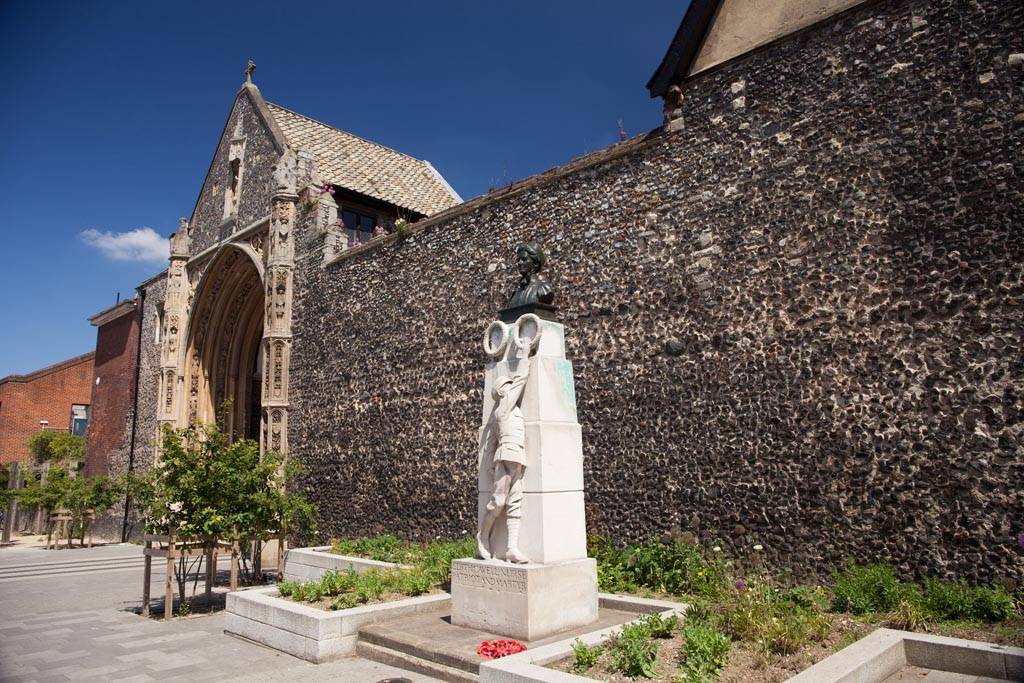 Edith Cavell statue in Tombland outside the Cathedral precinct.

Born and buried in Norwich and commemorated by a statue outside the cathedral precinct in Tombland, Edith Cavell was a nurse in occupied Brussels during the first world war who helped allied prisoners to escape. Tried as a spy, she was shot by the Germans in 1915. Before her execution she declared, ‘Standing as I do, in view of God and eternity, I realise that patriotism is not enough. I must have no hatred or bitterness towards anyone’. Her bravery in death made her a martyr – and caused huge embarrassment for the Hun.

Remember this line from The Beatles’ song Being For The Benefit of Mr Kite: ‘The Hendersons will all be there, late of Pablo Fanque’s fair, what a scene!’ Pablo who? Pablo Fanque, whose real name was William Darby, was the first black British circus proprietor and performer and he was born in Norwich in 1810.

The Illustrated London News said of him: ‘Mr Pablo Fanque is an artiste of colour, and his steed… we have not only never seen surpassed, but never equalled… Mr Pablo Fanque was the hit of the evening. The steed in question was Beda, the black mare that Fanque had bought from Batty. That the horse attracted so much attention was testament to Fanque’s extraordinary horse training skills’.

Fanque died in Stockport in 1871, having been celebrated in what was the golden age of circus. His blue plaque is on the John Lewis department store in the city. 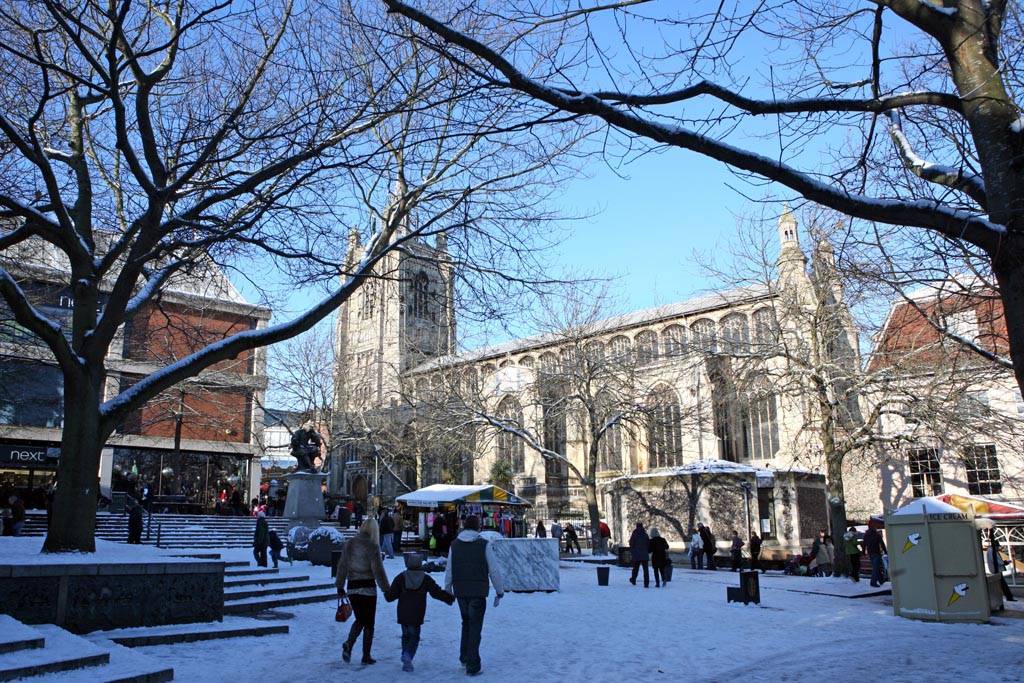 Buried in St Peter Mancroft Church and with a statue on nearby Hay Hill, Sir Thomas Browne was a renowned polymath whose knowledge included science, medicine, religion and the esoteric.

Browne appears at number 69 in the Oxford English Dictionary’s list of top cited sources and has 775 OED entries for the first usage of a word, including ambidextrous, anomalous, ascetic, migrant, indigenous, electricity, precocious, suicide, ultimate and gymnastic.

Browne hosted Charles II, the Queen and Court in Norwich in September 1671 when he was knighted. His coffin plate claims, ‘With the dust of his alchemical body he converts lead into gold’. Yes, he was an alchemist as well! 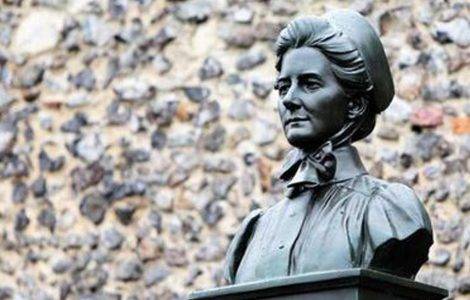