How a Norfolk man saved the American War of Independence

He helped save the War of Independence for the new republic, inspired George Washington, possibly came up with the name USA and wrote the American Declaration of Independence and was saved from Madame Guillotine only by American diplomatic pressure. He’s Thomas Paine, and he’s from Norfolk! 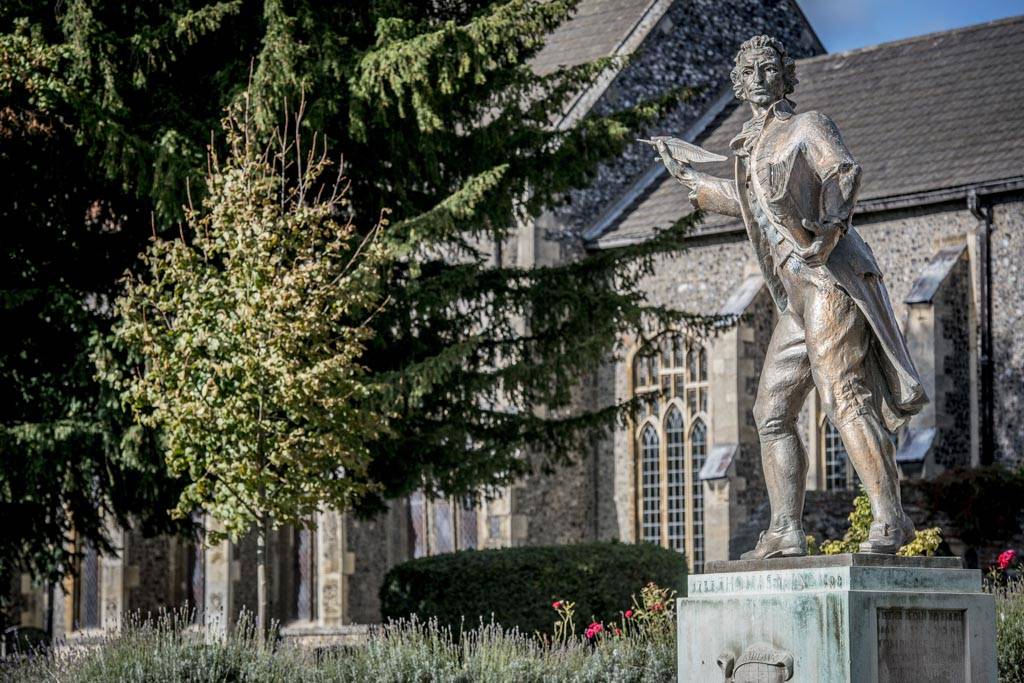 Thomas Paine was born on January 29, 1737 in Thetford, Norfolk, in the Brecks. The son of an artisan, he was well educated at Thetford Grammar School but soon chafed at the constraints of his home town.

His chequered career eventually led him to the American colonies where he emigrated in 1774 with the help of Benjamin Franklin.

There he found his calling, as a revolutionary writer. His famous Common Sense pamphlets, written in 1776, advocated colonial America’s complete independence from the British Crown, and helped rally support for this cause. It sold more than 100,000 copies in just a few months, and founding father John Adams said that ‘without the pen of the author of Common Sense, the sword of Washington would have been raised in vain.’

In the first winter of the American War of Independence his assertion that “these are the times that try men’s souls” rallied support for the American Patriot cause.

In fact, it could be argued that Paine’s words, his literary warfare, helped turn the American Revolution.

In August of 1776 General George Washington lost New York to British troops. This was followed by 11,000 American volunteers giving up the fight and returning to their families and Washington knew that on December 31 the service contracts of the remainder of his men expired and they would be gone too. The War of Independence would be over.

The General needed inspiration and it came from Paine’s words in the Pennsylvania Journal from his American Crisis: ‘These are the times that try men’s souls; the summer soldier and the sunshine patriot will, in this crisis, shrink from the service of his country; but he that stands it now, deserves the love and thanks of man and woman. Tyranny, like hell, is not easily conquered; yet we have this consolation with us, that the harder the conflict, the more glorious triumph.’

Washington commanded that the freshly printed pamphlet be read aloud to his beleaguered troops – and the rousing prose had its intended impact. 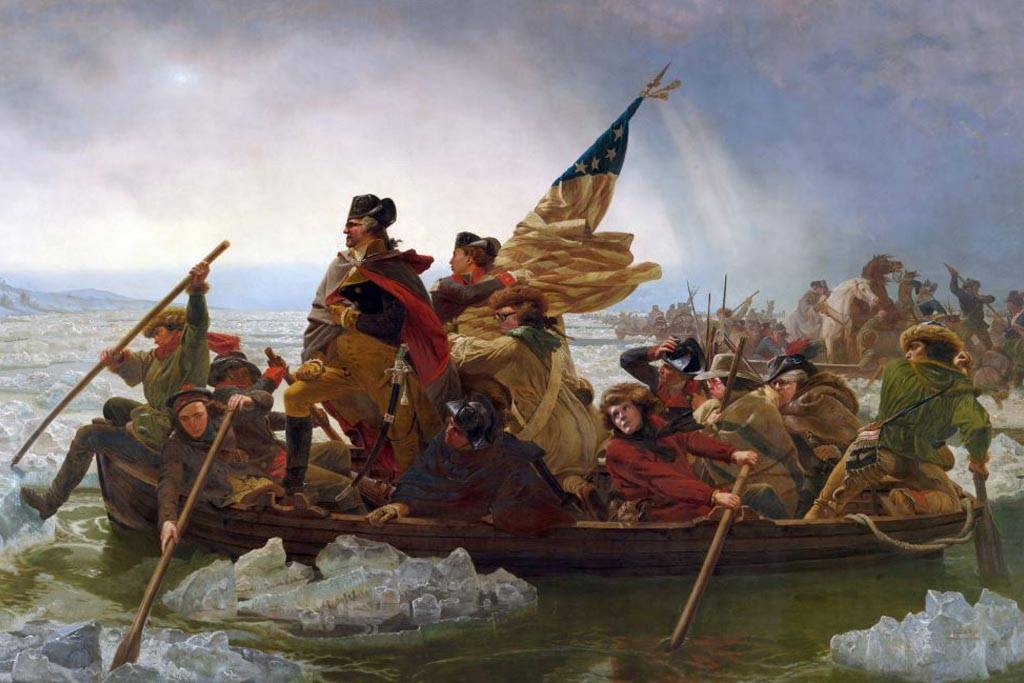 On Christmas night Washington and his men famously crossed the icy Delaware River to defeat hung-over Hessians and on January 2nd beat the British Army’s best general, Earl Cornwallis, at the Battle of Princeton. The tide had been turned in favour of the American Revolutionaries and they didn’t lose another battle – thanks to a writer from Thetford, Norfolk.

It’s believed Paine was also the man who came up with the name The United States of America for the newly-independent country.

Paine went on to support the French Revolution, living in France through the 1790s, was imprisoned in the Bastille for almost a year, became an outlaw in his own land and narrowly avoided execution in France during the revolutionary Terror. Only American diplomatic pressure prevented him from a meeting with Mademoiselle Guillotine. His book The Rights of Man is regarded as a liberal classic, but at the time it was both controversial and dangerous.

Paine returned to America and died at Greenwich Village, New York, on June 8, 1809 having also completed The Age of Reason and The Rights of Man. Only six people attended his funeral, a result of Paine’s criticism of Christianity.

After his death, Napoleon is said to have suggested that every ‘free-thinking city’ should have a gold-plated statue of Paine. 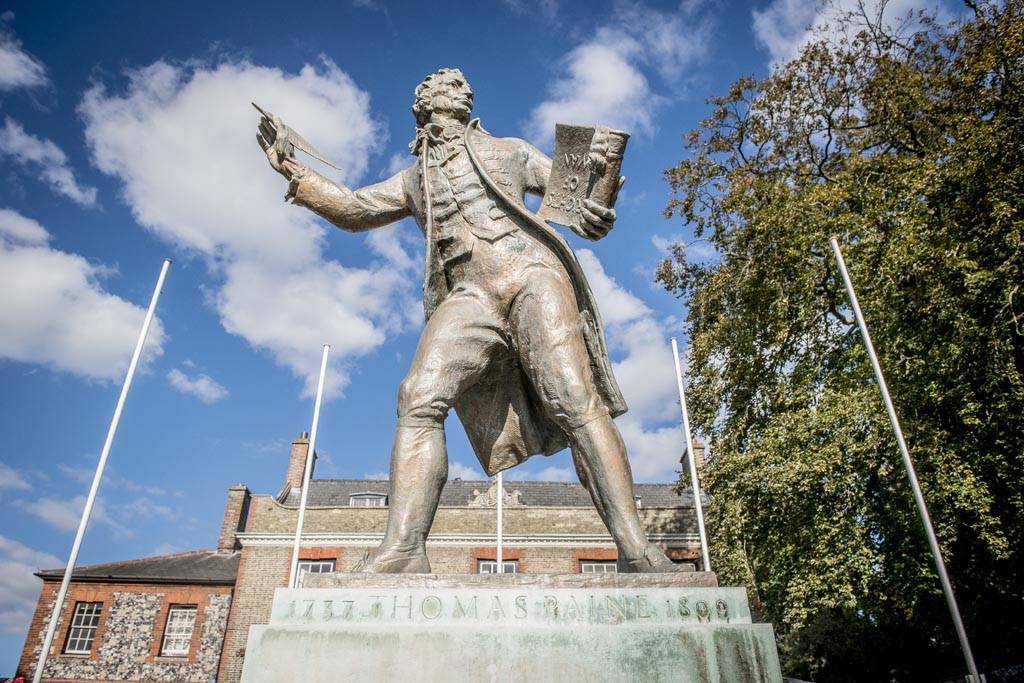 Instead, he is commemorated with a gilded bronze statue outside Thetford town hall commissioned by American philanthropist Joseph Lewis, who believed Paine was the true author of the American Declaration of Independence.

The statue has Paine portrayed in wig and period dress, holding a quill and a copy of Rights of Man. It was sculpted by Charles Wheeler RA, unveiled in 1964, and bears the inscription: ‘World Citizen, Englishman by birth, French citizen by decree, American by adoption’.

Wonder why Paine is holding his book upside down? Apparently it was a conceit of Wheeler’s to get us talking about the statue. So… it worked!

During the Second World War historically minded American airmen based at Knettishall, near Thetford, named their B-17 bomber after him, bearing his quote: “Tyranny, like hell, is not easily conquered”. They also put up a plaque at what is now The Thomas Paine Hotel, supposedly his birthplace.

His reputation keeps growing; in 2002 he was voted Number 34 in the 100 Greatest Britons poll conducted by the BBC.

Things to do in the Brecks and Thetford Forest 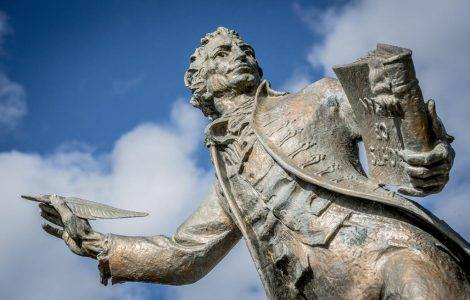