The National Trust’s Oxburgh Hall in Norfolk is free of scaffolding for the first time in six years, after a £6million project to restore the roofscape is completed, which has seen the replacement of 14,000 roof tiles, 27 chimneys and 14 dormer windows. 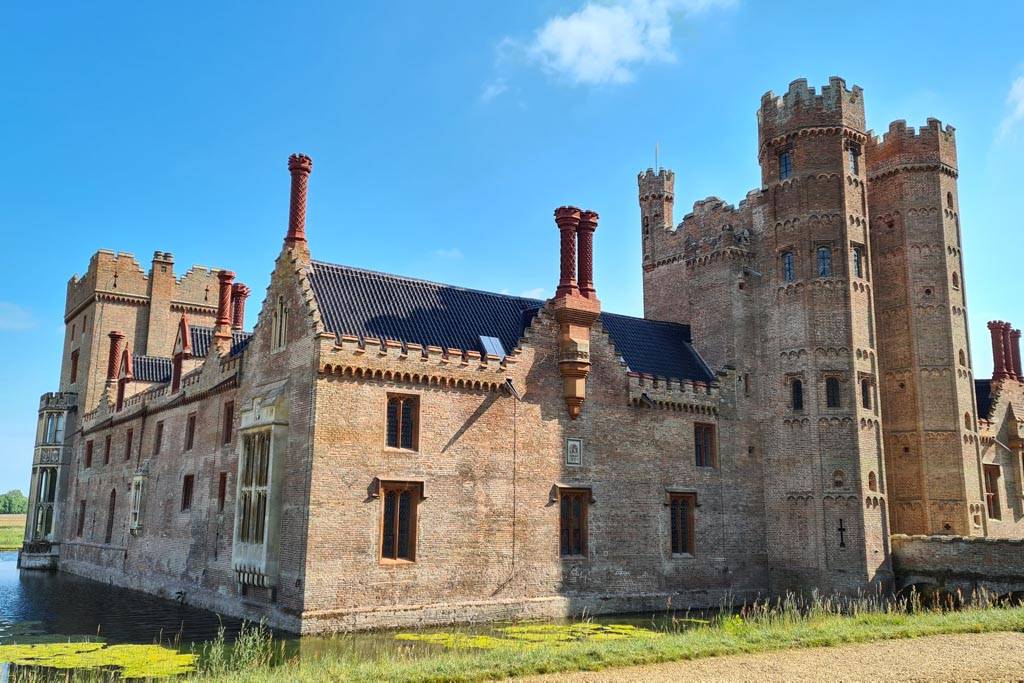 Now, a new immersive experience has opened in the gatehouse, which is the oldest part of the 500-year-old building. Here, visitors will be able to discover what life was like for many Catholic families in the 16th century, including the Bedingfeld family, who have remained devout Roman Catholics throughout their time at Oxburgh Hall.

The family’s support of Catholic Mary I in her claim to the throne brought the family unprecedented power and prestige. With the succession of Protestant Elizabeth I, the family’s fortunes changed dramatically. The Bedingfelds’ refusal to change their faith after the Reformation cost them dearly, both politically and financially. 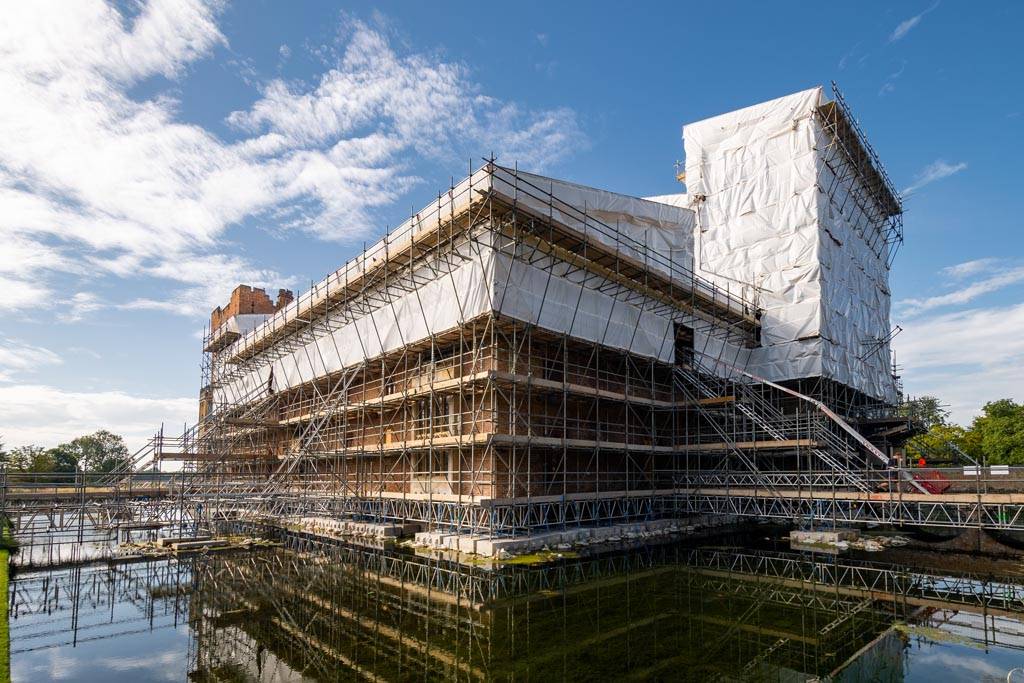 Property Curator, Lynsey McLaughlin, said: “Historical research tells us the “home” of Henry Bedingfeld was raided in 1590. Although there’s no concrete evidence that this was Oxburgh, searches of the houses of leading recusant families were commonplace and it is highly likely that such raids took place here between 1580 and 1610.

“This new volunteer led guided experience will share the story of a raid, putting the priest hole at Oxburgh into its historical context. Visitors will now be able to step back in time to discover how the King’s Room would have looked after it had been raided and searched for evidence of popish activity. Using an inventory from 1585 and with the help of specialist craftspeople to recreate the scene of a raid, volunteers will tell the story through the eyes of those who experienced it, helping to bring it to life on a very personal and emotive level.” 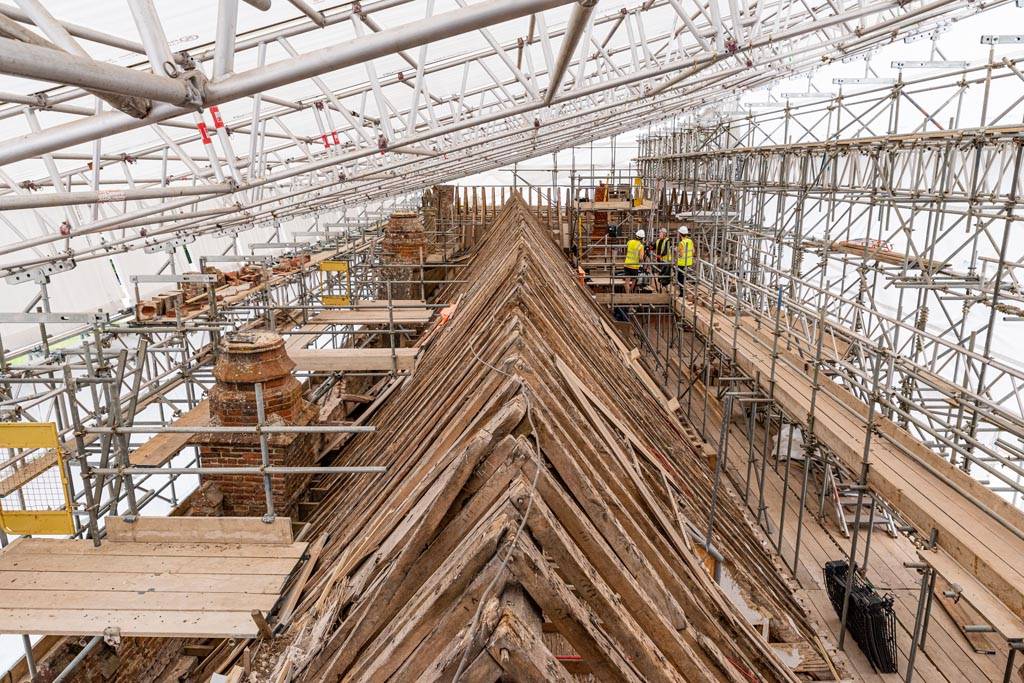 The new experience, which is currently open Friday to Sunday, follows the completion of the roof project, which came about after the unexpected collapse of a dormer window in 2016 that after further investigation, exposed a structure weakness to the roofline.

The project involved a highly complex engineer-designed scaffold being constructed to overcome the added complication that the 500-year-old building was surrounded by a moat. 31 miles of scaffold tubing and 605 tons of sandbags were brought in to create a base that protected the fragile moat floor and fabric of the building, but also ensured the ecology of the moat was safeguarded throughout the project.

Dave White, Project Manager, said: “Working on historic buildings can often throw up its challenges when you start to lift the lid on what lies beneath. Added to that, we were reaching a critical point with the roof off, just as the coronavirus pandemic first hit the headlines. So, it’s amazing to see how far we’ve come and the building now scaffold free. The craftsmanship on full display and Oxburgh’s future has been secured.

“The highly ornate mock Tudor chimneys, which had become unstable have been repaired or replaced using 12,000 hand-made bricks, weighing in at 29 tonnes that look like they’ve always been there. Part of Oxburgh’s distinctive character, each chimney is slightly different in its design, one of which was so complex, the brick-makers had to turn to a 3D printer to create a special mould.” 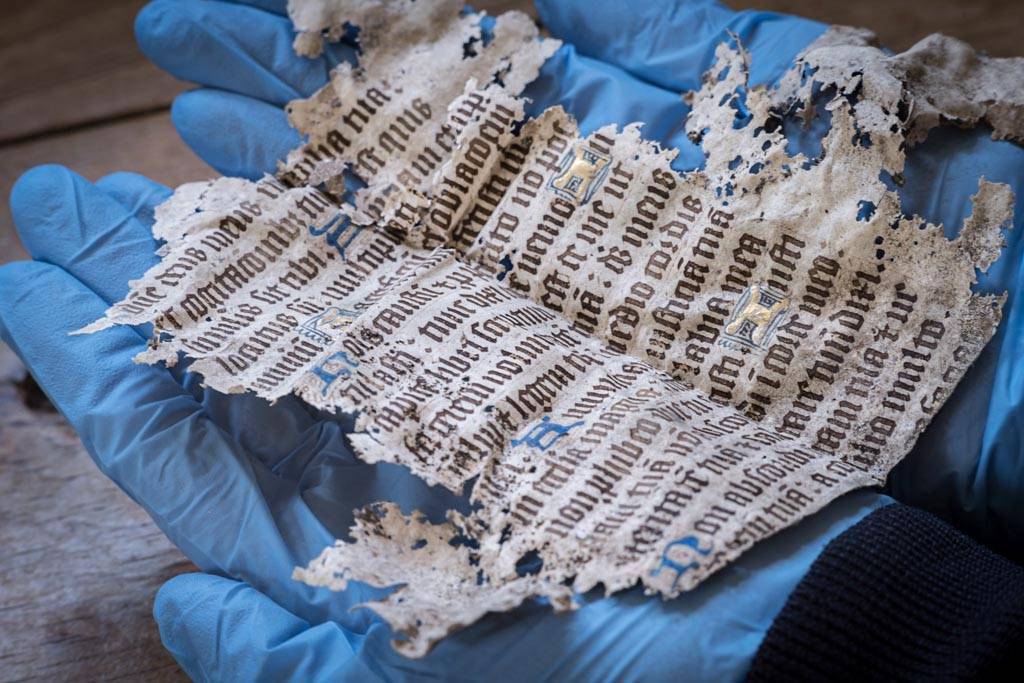 There have been several discoveries made throughout the project. From historic wallpaper in the attics to thousands of rare archaeological finds under the floorboards, which included a page from a rare 15th century illuminated manuscript, fragments of late 16th century books to high status Elizabethan textiles found in two ancient rats’ nests. The variety, age and significance of the items found and what they reveal make it a unique discovery and have helped shed more light on Oxburgh’s past.

Research has also revealed that part of the roof structure on the west side of the building predates Oxburgh and will likely have been repurposed. It raises the question, could this be evidence of a structure on the site prior to the building we see today. Dendro analysis and a structural survey in 2006 hinted at this, but the roof work has allowed experts a much clearer view, confirming their initial suspicions. 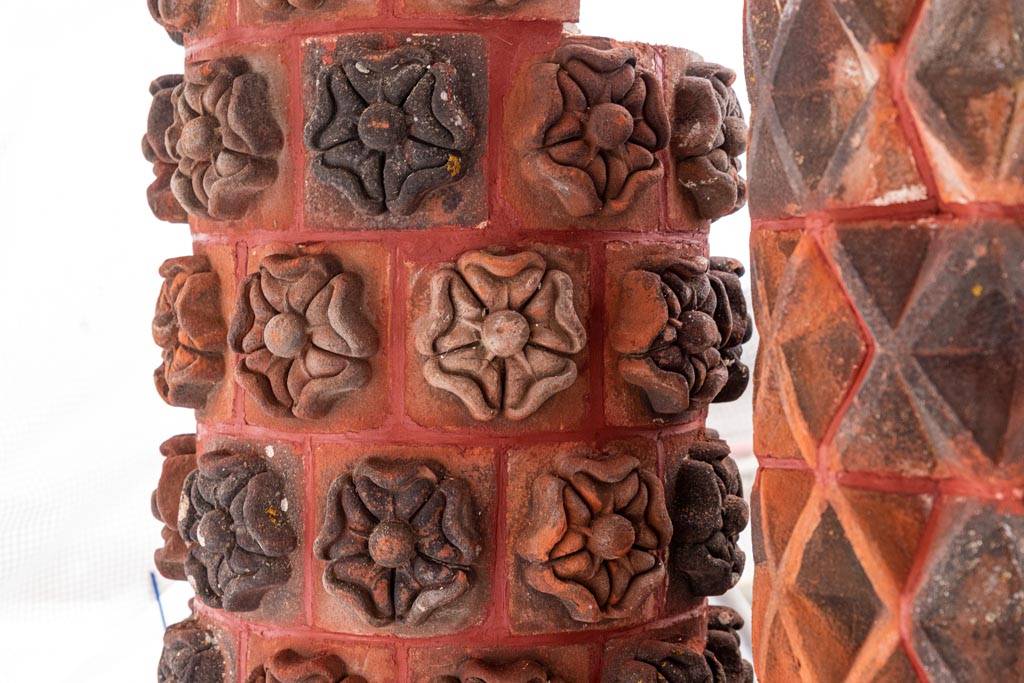 The roof project at Oxburgh Hall has been made possible thanks to a grant from the Heritage Stimulus Fund, part of the Culture Recovery Fund, which is administered on behalf of the government by Historic England, as well as support from The National Lottery Heritage Fund, thanks to money raised by National Lottery players, and The Wolfson Foundation.

Further support for the project has come from the European Agricultural Fund for Rural Development through the LEADER programme, the Sylvia Waddilove Foundation UK and The Constance Travis Charitable Trust. As well as National Trust members and supporters. 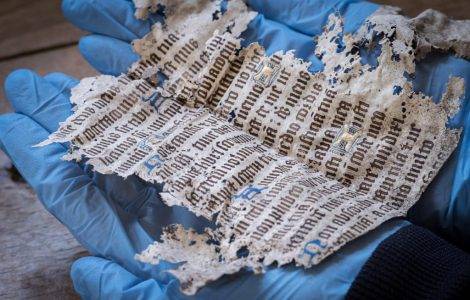