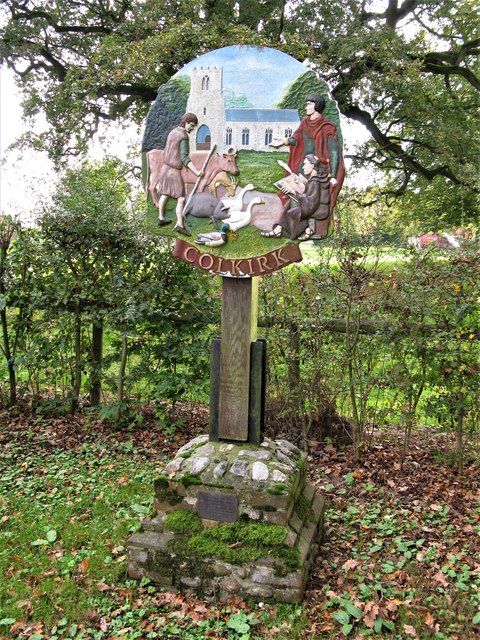 Colkirk is a village (population 2001-547 situated about two miles south of Fakenham in the county of Norfolk, England. Dating from at least the time of the Domesday Book.

Today, Colkirk is a parish of 1496 acres and 250 households. It lies on a boulder clay ridge, 250 feet above sea level and 140 feet above the River Wensum. Stand and look across to Fakenham 2 ½ miles to the north east and your eyeline is on a level with the top of the church tower in the town.

There is no evidence that Colkirk existed before the Norman Conquest in 1066. The first building was almost certainly a church from which the village takes its name. Colkirk is a Scandinavian word meaning the church of Cola. Kirk means “church”. Cola was probably the name of the builder or owner. The original church was built about 900 years ago. The present day St Mary’s church is thought to stand on the same site. The font dates back about 800 years.

Opposite the church was a rectangular green of about 12 acres. By the1200’s, a few cottages had been built around 2 sides of the green. By the end of the 13th century, people were also living near the assarts (woodland cleared for arable land) at the eastern end of the parish.

The manor of Colkirk originally belonged to the Bishop of Elmham and is recorded in the Domesday Book in 1086. The remains of the Bishop’s cathedral can still be seen at North Elmham today. His moated manor house in Colkirk lay off Longland’s Lane (now the bridleway just past the entrance to Manor Farm and on the opposite side of the road). The manor buildings included a private chapel, great barn and dovecote. There was also a fish pond. The house backed on to Colkirk Wood, a managed oak woodland of around 120 acres. The wood had originally been part of the royal manor of Fakenham but was annexed by the Bishop into his own manor.

In the early 1100’s, the Bishop gave the manor to one of the knights in his private army. The knight took the title “Richard of Colkirk. He and his successors lived at the manor house until about 600 years ago after which it fell into decay.

Growth of the village

By about 1600, there was a blacksmith and 6 cottages on the green. The green was also the home of the Campyngland.

Campyng was a traditional Norfolk game played between two villages. A token – often a gauntlet – was hurled by one team or “camp” at the other. They had to return it as quickly as possible as, whilst they still had possession, the opposition could rush across and drag them back as “prisoners”. The game continued until one team had captured all the opposing players. Campyng was a rough game, played by up to 300 men at a time, with deaths not being uncommon. The Campyngland moved across the road to its triangular site east of the church in the late 1600’s.

Near the northwest corner of the green was a watering place, (now the village pond). Much of the original wasteland, small areas of woodland and pasture surrounding the village centre had now been converted into arable land. The only large fields were those owned by the main farms. Small scale farmers and nearly every family in the village either owned or rented one or more narrow, long strips of land known as furlongs, each being about 200 yards long by 40 yards wide with no visible boundary between them.

By 1600, a few dwellings had also been built along Town Lane (now Dereham Road), and towards the bottom of what is now Hall Lane; this small cluster of cottages with its own green and watering place was known as Nethergate.